As we develop the ability to passing through subtler and subtler levels of dimensional formation, an inertial power is created which permeates through this multidimensional spectrum at the collective level.  It is the purity of this inertial power that enables this, purity being the releasing of additive, fabrication, tether, binding and obstruction, which when coordinated with the qualities and vehicles of the Higher self and Enlightenment path, awakens a residue, seed or form of memory that is able to pass through the many obstructive formations within our collective consciousness because of its purity.  Some have and still will choose to obscure their perceptual awareness of this, while others have and will choose to investigate and seek out what this  means.  The purity of inertial power within the aforementioned composition, awakens a degree of knowing however the choice to act and engage with this insight, or the choice not to engage, remains the choice of each being.  Choices for our greater good or detriment, determination, action and sincerity, all are qualities that as human beings we are gifted with in how we decide to utilize them or not.  The ability to choose is the gift and it remains so regardless of the strength of any cultural and social narratives and constructs, or the purity of the inertial power within a composition.

To pass through subtler and subtler levels of formation requires development of the ability to first perceive, then coordinate the qualities and vehicles which enable movement through the spaces and gaps which exist within all formation.  Though all formation is always in change, whether slow, fast, noticed or unnoticed, meaning that it is not the same formation which is passed through, what is being passed through are formations of approximately the same level of dimensional formation or density.  It is the developmental transformation of the qualities and vehicles that enable the passing through of each respective level of dimensional formation, which engage the mechanics allowing for continual movement through of subtler and subtler levels of dimensional formation, until origin is reached, passed, all tether and binding released, and Enlightenment attained.

Some practitioners envision the process of passing through the spaces and gaps within all dimensional formation as similar to the diagram below, with each arrow representing qualities and vehicles which enable both perception of subtler spaces and gaps, and the functional ability to pass through these. 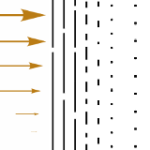 This developmental transformation of our awareness at any level has also been commonly called ascension, expanded consciousness, awakening among other terminologies.  It is important to note however that the degree of ascension, expanded consciousness or awakening directly corresponds to the level of dimensional formation which we are able to pass and not pass through at present.  Certainly utilizing the common language of measurement, ascension, expansion, deepening and broadening have occurred, as has awakening to previously obscured levels of awareness, however that these processes are occurring does not indicate the level to which each of these specifics has reached.  In remaining steadfast to  our goal, continually refining our ability to pass through spaces and gaps in subtler and subtler levels of formation, broadening, deepening, expansion and most importantly movement through the multidimensional spectrum of the Higher self path will be occurring, and our ultimate goal of moving to Enlightenment will inevitably be attained.  We will pass through many processes, experiences, realizations and insights during this journey however by not becoming allured, attached, tethered and bound to the “scenery” we continue on to our destination.

All activity when sustained develops inertia.  The Guild practices are the vessels through which the Attunements, which are the maps and keys, can unlock the qualities and vehicles which engage and enable the mechanics required for activating and sustaining the continued openings which unfold the path of the Higher self, the ultimate destination being Enlightenment.  In passing through the passage that unfolds before us, we increasingly come to know a broader landscape of our being.  What we call the multidimensional self.  Much “exotic scenery” can be experienced as our perceptual awareness is made conscious of the many dimensions of self as we pass through this spectrum and for some, this is enough.  If however our goal is to attain Enlightenment, we must continue to move, passing through the entire spectrum of dimensional formation until eventually and inevitably reaching origin, the “machine” which is designs and manufactures our continual incarnations.  Then in passing through origin, all tether, all binding, all obstruction and all obscuration is released.  Thus is experienced freedom without restriction and inner peace without condition, these being qualities known when having attained full Enlightenment.

Your cart is empty